USE FOR
Magna 770 (for AC & DC) is the ideal maintenance electrode for use with:
• Malleable Iron • Grey Iron • Ductile Iron • Meehanite • Steel to Cast Iron 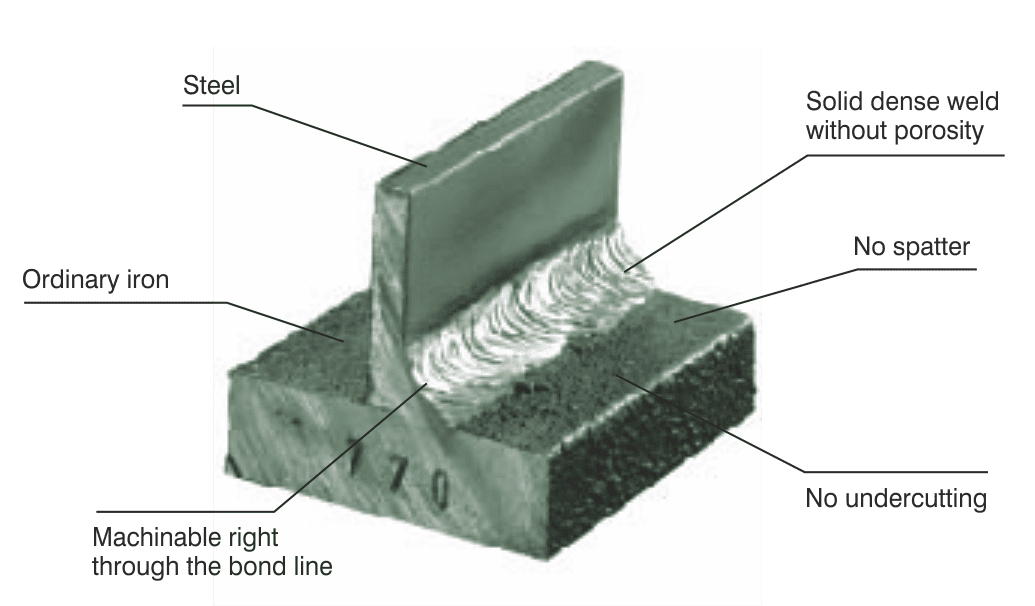 High Elongation
An important feature of Magna 770 is its high elongation. This high elongation gives the weld deposit a greater amount of resiliency, enabling it to stretch or shrink with less danger of rupture. The greatest problem of cast iron welding is cracking. When ordinary cast iron electrodes are applied to thin cast iron, the cast iron is subject to cracking. When applied to thick cast iron, the weld often cracks. This is because the weld has to take up less space when cooled to ambient temperature than when originally applied in molten conditions. When the weld cools it contracts and draws from the base metal. Since cast iron has practically no elongation and cannot bend, severe stress is placed on both the weld and base metal. If the base metal is thick, the greatest stress is on the weld, being of smaller dimensions. If the iron is thin, the weld will contract and great stress will be applied to the base metal, often causing cracking. When Magna 770 is used, the cracking tendency is minimized. The higher elongation allows the weld metal to stretch and this tends to compensate for the cooling stresses.

Contains Supplements that Assist the Weld
It is a well-known fact that sulphur and phosphorous which are present in all cast irons often cause cracking. Those elements dilute into the weld metal and create cracking tendencies. Magna 770 has a metallic formulation that tends to avoid the dangers of phosphorous and a supplement that has been added, controls sulphur. This additive actually converts the sulphur into a harmless form of manganese sulphide. The coating also tends to flux out phosphorous into the slag. One of the greatest problems in cast iron welding is the presence of cementite, a super hard structure of iron and carbon mixed and rapidly cooled, which causes brittleness and lack of machinability. Magna 770 contains an additive that enhances the formation of free graphite, which is soft and easily machinable, and which suppresses cementite, which causes hard spots and reduces machinability. The additive to Magna 770 combines with the graphite at the surface and holds it in suspension tending to suppress the formation of cementite. This assists the weld deposit and the adjacent base metal in remaining machinable. Additives also prevent the burning off of carbon and other alloying components and extend the solidification range. Magna 770 has an amount of carbon calculated to lower the melting point and increase weld fluidity. This carbon has a decisive effect on the size and distribution of graphite.

APPLICATION:
Degraphitize Surface Before Welding
It is most important to remove as much surface carbon as possible from the areas to be welded. Use an oxyacetylene torch adjusted to a highly oxidizing flame and play the flame over the weld area. Continue this action for several minutes, then brush the area with a wire brush. Repeat this procedure two or three times.

Avoid Graphite Smear
Do not use a grinder to prepare Cast Iron prior to welding. When a grinder is used, the graphite from the Cast Iron plugs the wheel and remains on the wheel, while the iron is thrown off in sparks. Before long the wheel is rubbing the graphite back into the Cast Iron with each revolution. Cast Iron should only be prepared by chipping, drilling, filing, or by the quickest and efficient method, Magna 100.

All sharp corners should be slightly rounded. Rough edges and small fragments of metal must be removed prior to welding, otherwise these will melt and form hard spots due to the iron-carbon combination in the weld area.

Welding Over Previous Welds
After one bead has been deposited the following weld bead should be made by directing the Magna 770 electrode into the previous bead and allowing the weld metal to wash outward. Use this procedure for all subsequent beads. This procedure provides three benefits; Firstly, it prevents an intense heat concentration on the cast iron. Secondly, it retains heat in the weld area and retards rapid heat dissipation (thus preventing hardness in the weld and weld area). Thirdly, it anneals each pass and tends to remove any hard layers which may have formed.

Application Procedure
Magna 770 will remove grease, oil, and dirt quickly and thoroughly from the weld area. Holes should be drilled approximately 12 mm. (1/2”) from each end of cracks to prevent them propagating during the welding process. Tack weld to retain alignment. A gentle preheat, particularly on large sections will ensure high machinability. Select the largest diameter electrode and lowest amperage possible and use either AC or DC reverse polarity welding machines. Use conventional stringer bead or weaving techniques to apply Magna 770. Remove slag between passes. Allow cooling naturally or by covering with lime or asbestos. In most instances, Magna 770 can be “poured on” rapidly. It is unnecessary to use the old-fashioned method of welding short beads at a slow rate as required with ordinary electrodes. With Magna 770 the interpass temperature is not critical; the welding can be almost continuous causing the interpass temperature to build up.

Where the size and location of the equipment to be welded makes preheating impossible, but the design is such that expansion and contraction caused during welding will warp or distort the metal.

The following points should be observed:
a) Before each deposit solidifies and while it is still hot, lightly peen with a hammer.
b) Pause between passes to allow heat to dissipate.
c) By making separate weld deposits and then going back over and filling in, you will avoid localizing excess heat.

Or fill up the below form with your requirements!

Chat with us on WhatsApp